v!rgin identified as Naom, tie the knot with a 90-year-old lover known as Rwakaikara. In the Now viral news, the new Couples exchanged their marital vows and commit their marriage to the hands of God at St. James Cathedral, Kigorobya, Hoima District of Uganda.

The minister in charge of the church where the marriage was held, Bishop Kyamanywa, told the congregation that it is never too late when one follows the leading of God.

He also thanked the new couple for following God’s plan and the Priest also challenged young singles in his congregation to also follow the way of God, stating that since he started his pastoral work, he has never wed a couple of this age and that this has been a blessing to him. In his words he said ;

“It’s my first time since I started work as Bishop to wed an old virgin woman as Naom. This is amazing and the world will read and learn a lot about you,”

Although the groom Mr. Rwakaikara already has 10 children and 40 grandchildren from his first (late) wife, but his new wife Naom has never gotten married before and doctors have confirmed she was still a first class v!rgin at 83 as of 24th December 2017.

Until her marriage, Naom was world’s oldest female v!rgin and has been receiving a lot of money from well-wishers to support her.

See photo from their wedding 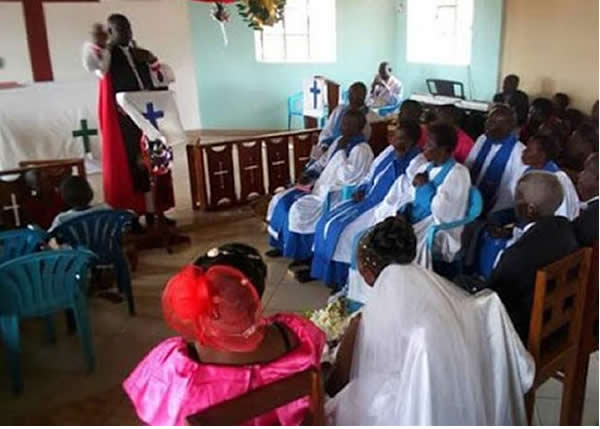 • Meet the Leonards, Nollywood Actor Fredrick Leonard and his fiance Peggy Ovire says as they release their pre-wedding photo

• This is too much, See Netizens reactions as chief bridesmaid and grooms man rocks each other during Wedding

• It’s been 10 years of unconditional love, Nollywood Actor Charles Inojie say as he celebrate his 10 years wedding anniversary with his wife

life of a celebrity:1 how it feels

I love him and that all that matters, Reaction trails as woman divorces her husband,…

I said Yes Nigerian Man in Tears as his Woman Proposes to Him with a Car, Video Goes…

My wife said she wouldn’t have married me if I didn’t have borehole, Man got shocked…

Check out the Nysc Throwback photos of 10 Nigerian…

I love him and that all that matters, Reaction trails as…

I tap into this: Joy as Mother of twins welcomes triplets…