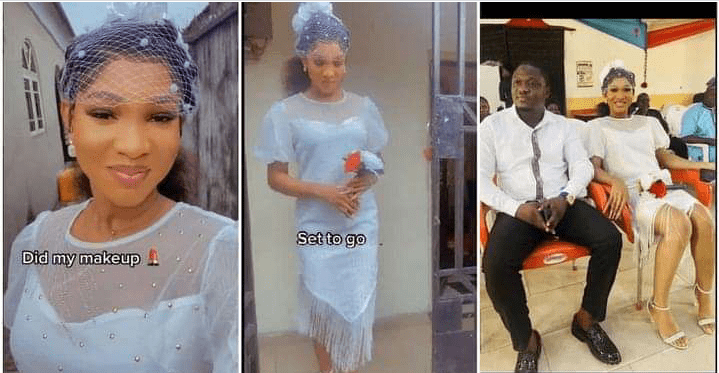 Beauty in simplicity, Beautiful Bride use simple dress for her wedding day say she doesn’t want to waste husband Money

A video which is currently going viral on social media has amazed several Netizens as a young bride appears at her wedding without makeup.

Social media users have taken their time to appreciate the new bride for her dignity and have described the bride as an epitome of simplicity because of the way she appeared at her wedding.

In a video which was posted on TikTok by a user identified as Simply Simdy, the new bride stepped out in a simple and beautiful white gown and wear lovely smile on her face as she steps to the alter to tie the knot with her lover.

The simplicity of her gown has triggered heavy reactions from Netizens and they have rushed to her comment section to admire her beauty.

@missqueenderlin reacted: “Congratulations sis. But for dis life e good to dey simple. See as you fine the other aunties der say how dem dey call dat their gown?”

• This love is massive, See as Nollywood Actors appear in style as they Grace Frederick Leonard and Peggy Ovire Wedding ceremony

My wife said she wouldn’t have married me if I didn’t have borehole, Man got shocked…

This marriage no go last, oga Sabinus reacted as he hold…